Blacklisted Is the New Black: Alicia Silverstone Takes on Rockefeller Industrial Medicine - An expose of the historical fraud of vaccination

Let's not pretend that Hollywood is free from political influence.

And let's not pretend that the political forces in Hollywood are in any way interested in your welfare.

The political forces at work in Hollywood benefit a handful of families, most notably the Rothschild family and the Rockefeller family. "George Soros" (admitted Nazi collaborator Gyorgy Schwartz) is also a significant beneficiary from behind-the-scenes Machiavellian Hollywood machinations.

A few small-fry benefit, too, of course: movie producers, movie directors, and on down the line -- a trickle-down of blood money.

If a mere actress takes on this dark machine, what are her chances? 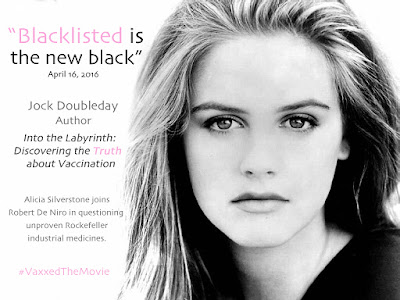 Despite the threat of being blacklisted as an actress, Alicia Silverstone has courageously come out against the monied industrial interests behind Hollywood. 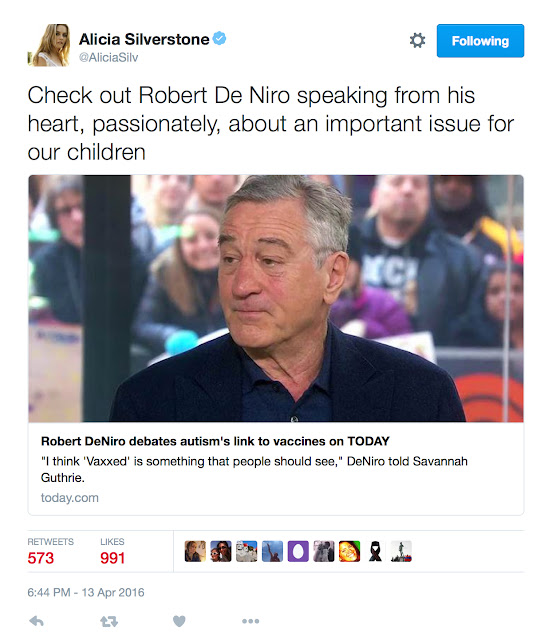 Alicia's original anti-vaccine splash was in her 2014 book, The Kind Mama: A Simple Guide to Supercharged Fertility, a Radiant Pregnancy, a Sweeter Birth, and a Healthier, More Beautiful Beginning.

But to hear one Salon writer talk, you would think that Alicia had written a parenting book filled with nutty advice that no one would take seriously.

The desperately under-researched, anti-natural parenting Salon writer in question is Mary Elizabeth Williams -- or as I call her, "the Goofy Redhead":

Williams' article was mistitled. It should have read, "Alicia Silverstone's well-researched vaccine stance." But this title wouldn't have gone very well with her article's pro-vaccine nonsense.

Miss Williams' article was chock full of disinformation. Salon is a well-known damage-control site for the eugenics families presently engineering depopulation worldwide. The simplest and most succinct way to describe these eugenics families is: "people who believe that their genes deserve to survive into the future and who also believe that your genes don't deserve to survive into the future."

That's a very nice way of putting a truly evil worldview. Eugenics ain't pretty, and it's never been pretty.

Salon, like Wikipedia, gives its readers just enough truth, on issues that don't matter, to keep people trusting the site. Then, on issues of import, Salon and Wikipedia bring down the Rothschild/Rockefeller/Soros hammer.

Truly a blessing to the pharmco fortune hunters and psychopathic eugenicists, Mary Elizabeth Williams, the Goofy Redhead, spouts her high school "goofy wisdom" about vaccines in her March 23 article -- not realizing that the textbooks she's remembering from (why quote when you can just remember?) were written by Rockefeller-funded minions.

[I HEREBY CHALLENGE the Goofy Redhead (Salon writer Mary Elizabeth Williams) to send me any data, any stats, any chart, supporting her pro-vaccine stance -- she won't: she blocked me on Twitter after 10 days of informational Tweets making fun of her pro-vaccine ignorance in her "Vaxxed" review -- and I will publicly red-line, in detail, exactly how the Rothschild-funded Rockefeller family lied (and how dark forces continue to lie) to high school students and medical school students and everyone else about 1) vaccine efficacy (nonexistent) and 2) vaccine safety (nonexistent).] 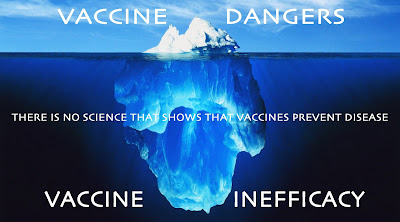 Did you know that there is no science that shows that vaccines prevent disease?

It's true. The reason I know this is that I've read 27 books on vaccination, all heavily documented. My favorite books on the subject of vaccination are listed below.

Favorite Books on the
Historical Fraud of Vaccination

1. What Every Parent Should Know about Childhood Immunization (Jamie Murphy)

2. The Sanctity of Human Blood: Vaccination Is Not Immunization (Tim O'Shea)

3. Vaccines: Are They Really Safe and Effective? (Neil Z. Miller)

4. How to Raise A Healthy Child in Spite of Your Doctor (Robert Mendelsohn)

5. Immunization: The Reality Behind the Myth (Walene James)

7. The Vaccine Guide: Risks and Benefits for Children and Adults (Randall Neustaedter)

10. A Shot in the Dark: Why the P in DPT Vaccination May Be Hazardous to Your Child's Health (Harris L. Coulter and Barbara Loe Fisher)

Epidemiological science (the study of disease in populations) shows unequivocally that vaccines do not prevent disease.

In fact, vaccination is one of the most horrific medical practices ever invented, killing and maiming people (adults, children, everyone) by the millions.


"Exclusive: The Spanish Influenza Epidemic
Of 1918 Was Caused By Vaccinations"
http://www.getholistichealth.com/37731/exclusive-the-spanish-influenza-epidemic-of-1918-was-caused-by-vaccinations/

What books, what information, what sources does the Goofy Redhead cite in her critique of Alicia Silverstone's book The Kind Mama?

In her entire book review of The Kind Mama, Miss Williams cites one source for her pro-vaccination, anti-natural immunity, anti-science stance.

What is that source? The World Health Organization. What sources does WHO give us on the page source cited by the Goofy Redhead? None. Zero. Nothing. No sources.

The WHO web page cited by the Goofy Redhead is simply a list of what are termed "myths" about vaccination dangers and inefficacy -- and WHO's authoritative but unsourced "debunkings."

The Goofy Redhead also tried to create an aap.org hyperlink for her assertion that "receiving multiple vaccines has no harmful effect" -- but when clicking on the hyperlink, one gets a 404 error. "Not found."

Instead of documenting her article, the Goofy Redhead is "remembering something" from high school . . .

The "polio vaccine salvation" story was given to all of us on a silver platter, as impressionable youths in high school. We all remember it.


But some of us researched it -- and found out that polio vaccine salvation was a lie. The truth is something startlingly different.

When Jonas Salk's live polio vaccine wasn't working to decrease cases of paralysis (in fact, it increased polio incidence -- by up to 600% in some counties), the medical community *changed the description* of the disease, calling more minor cases of paralysis "meningitis" -- so that it looked like the number of polio cases was diminishing.

Interestingly, "polio" is the pro-vaxxers' "ace in the hole." It's their go-to conversation stopper. This high school textbook nonsense is the best that the pro-vaxxers can do. And when you write them back with the real info, they ignore it.

Where's the real info? The real info is in Janine Roberts' well-researched article:


"Polio: The Virus and the Vaccine"
http://jeffreydachmd.com/wp-content/uploads/2014/12/Polio-Virus-Vaccine-Janine-Roberts_Ecologist-2004.pdf


Anyone who wants the .pdf of Janine's article -- which includes photos -- feel free to email me at jockdoubleday.writer at gmail dot com.

Once you find out that they lied to us about polio -- that polio is not caused by a virus but by (Rockefeller) industrial pollutants -- you'll wonder what else they're lying to us about, and who's getting paid to lie, and how much they're getting paid, and . . .

The Rockefellers also wrote our medical school textbooks. Medical school (actually, inDOCtrination school) textbooks were fully re-written in 1901. At the behest of the Rockefeller family, these textbooks took out all negative references to vaccination. How could the Rockefeller drug companies make any money if people used natural methods (especially diet) to combat disease?


"Who created orthodox medicine? Where did that come from?

"Well, it actually came from the Rockefeller Foundation back in 1901. Because of the
Standard Oil scandals, no one wanted to be called a Rockefeller. Everybody hated all
the Rockefellers.

"And so Reverend Gates went to John D. Rockefeller, Sr. and told him, he said,
'Here's a way we can repair your reputation.'

"And he gave him a good example. He said, 'There was this man who everybody hated,
and he started giving money out for all sorts of philanthropic enterprises, and
soon people forgot all of the bad things.'

"Because Gates's father was a physician, and John D. Rockefeller's father was a
quack snake-oil salesman, he said, 'Let's form the Rockefeller Institute of Medical
Research.' And so they created this in 1901.

"Rockefeller owned what was called the drug trust: that's the major drug
manufacturing firms all over the world: Merck Pharmaceuticals, Lederle, all
of these pharmaceutical companies.

"And of course, the aim was to remove all nutrition -- references to nutritional type treatments -- from the medical schools.

"They closed down half the medical schools in the United States. There were 165 medical
schools at the time. Then [Rockefeller] had his anointed medical schools, which he poured
his money into, appointed the professors from his own stock of professors.

"And so they created an educational system that taught the things that he wanted taught.
And therefore every professor that came out  of those programs taught the same thing."

Getting back to the Rockefeller front man -- well, front woman -- death-medicine tip-of-the-spear Mary Elizabeth Williams -- what were the Goofy Redhead's sources for her "Vaxxed" article of March 23, 2016?

Miss Williams was kind enough to cite -- uh, her own article (?) -- "The Disneyland outbreak is the anti-vax tipping point," in which she talks about a measles outbreak at Disneyland -- which of course she blamed on the unvaccinated, even though Natural News discovered that "the vast majority of those who caught measles had previously been vaccinated, and yet the outbreak is still somehow being blamed 100% on the unvaccinated":


"Only 14% of people in Disneyland measles
outbreak were unvaccinated, but it's 100%
their fault, claims propaganda"


Has Miss Williams been kind enough to correct her pro-vax assertion in her Disneyland article? No. Her claim that the Disneyland outbreak was the fault of the unvaccinated stands.


What other sources does the Rockefeller family's tip-of-the-spear cite in her March 23, 2016 Salon goofy tirade against Del Bigtree's documentary, "Vaxxed"? Does she have ANY solid information whatsoever?

The Goofy Redhead does provide us with a JAMA abstract which concludes that no link to autism is found in a small study of children given the MMR vaccine.

But she does not provide us with a link to the 124 research papers concluding that there IS a vaccine-autism link:

Is there, perhaps, an agenda here? Whose agenda is it?


Will Alicia Silverstone's Career Survive
Hollywood Blacklisting for Speaking out against Vaccination?


Alicia Silverstone is a mother, now. It's been quite some time since she appeared in the smash hit Clueless that was all the rage in Hollywood in 1995.

But she still acts in films. In the last five years, she's been averaging about 2 movies a year. Quite a lot for a young mother.

Also, after the success of Clueless, she signed a $10,000,000 3-movie deal with Sony. And of course her book The Kind Mama brings in income. So she and her husband Christopher Jarecki won't be hurting even if she never works again.

Nevertheless, it is courageous of Alicia to speak out against the Rothschild-funded Rockefeller death-medicine machine that sits behind Hollywood like a deranged hyena, waiting for someone, anyone, to step out of line.

When will parents stop poisoning their children with dangerous and ineffective vaccines? When will we all stand up to the cynically created and nefarious Rockefeller death-machine?

But don't try to contact the Goofy Redhead, Mary Elizabeth Williams, who writes for Salon. She'll block you.


Jock Doubleday is a health researcher, citizen journalist, playwright, screenwriter, stone worker, and artist. He is the author of "Into the Labyrinth: Discovering the Truth about Vaccination": http://waitingforvanek.blogspot.rs/2016/03/into-labyrinth-discovering-truth-about.html