The BBC decided in February of last year that the word "Palestine," in the context of the phrase "Free Palestine," should be censored, because "implying that Palestine is not free is contentious."

Perhaps we, the alternative media, should censor the acronym "BBC," substituting "We make castanets out of your testicles" – a phrase originally found in Monty Python's "Holy Grail" censorship letter: 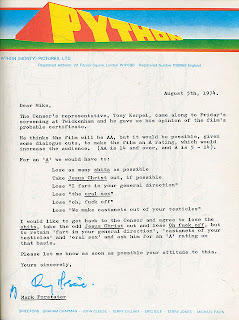 Perhaps the alternative media can come to an agreement that, from February 8, 2012 onward, all alternative media references to the Broadcasting Corporation presently known as the BBC will substitute the words "We make castanets out of your testicles" for the vaunted acronym.


One consequence of such an agreement would be that, in performing internet searches for references to itself, BBC employees would need to enter the words "We make castanets out of your testicles."


Proponents of a Ministry of Truth-style censorship of the internet believe that "the Web, while being 'tremendously useful,' is giving too great a voice to those who seek to 'undermine scientific consensus, overturn well-established facts, and promote conspiracy theories."

These self-appointed censors-for-the-greater-good are "particularly worried about 'denialists of global warming or benefits of vaccination'" and therefore desire to memory hole the science-backed claims that the planet is actually cooling and that vaccination, as a health measure, has been a fraud since its inception.

If Palestine, whose voice has long been silenced by the Rothschild-controlled media, must endure censorship of its very name, perhaps the BBC should experience a similar namelessness, which in future human history would forever be attended by the imagined sound of percussive castanets.

A year's worth of comments on the BBC's censoring of the word "Palestine."

The full version of "Fire in the Booth":

Mic Righteous sings full version of "Fire in the Booth"

Posted by Jock Doubleday at 7:11 AM No comments: