PLEASE NOTE: There may indeed have been deaths at #Orlando, but this was a fully staged event produced by the Rothschild bankers' FBI. Did you know that Orlando police SWAT took three hours to enter the scene of a "mass shooting"? Three hours. Do you know why? Because the Rothschilds' FBI, which orchestrated the event, warned the Orlando police off so that their crisis actor scenario could play out -- a scenario in which there were no ambulances, by the way. Why wouldn't there be ambulances? Because the crisis actors weren't wounded! They were pretending to be wounded. Were people killed that night? By the Rothschilds' FBI? By Orlando SWAT? By an FBI patsy the media is calling "the shooter"? By multiple FBI patsies? We don't know. But we do know that the Rothschilds were happy to kill nearly 3,000 innocent people on 9/11. And they would certainly be happy to kill scores of people at a nightclub to give their staged event more power. Get your thinking caps on, people. There are malevolent forces at work in the world today, and most of them can be traced back to the House of Rothschild, which has incited and funded every major war for over 200 years. This event was one more event in a series of divide-and-conquer events staged and funded by the House of Rothschild. 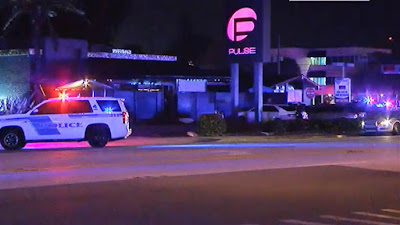 #1. The father of the "Orlando shooter," Seddique Mateen,  is a CIA asset.

#3. The best gunman on the planet could not have done what it is alleged Omar Mateen did.

#4. Why did no one stop "shooter" Omar Mateen while he allegedly changed magazines a minimum of four, and more likely eight, times?

#6. "Victim" is seen being carried TOWARD the nightclub instead of AWAY from it.

#7. Nonprofessionals are carrying "shooting victims" anywhere for any reason.

#8. "Victims'" friends and relatives can't generate tears or anything resembling the appropriate emotions for the proposed scenario.

#10. "Victims" were pronounced dead at the scene (by reporters?) instead of at the hospital as is customary.